The second week in June, the kids and I headed up to Billings. Jordyn had an endoscopy scheduled on Wednesday, so we just stayed the rest of the week to spend time with my parents. We have been seeing her GI doctor almost once a month lately, trying to figure out the cause of her horrible reflux and why NOTHING we've tried in the past two years has helped at all. So, we did an endoscopy (putting a small camera in your esophagus and stomach). Last one we did was two years ago when her throwing up started. And guess what? The results showed nothing besides some irritation from throwing up! Surprise! Even more surprising was that she no longer has eosiniphilic esophagitis (EE). Her first GI doctor diagnosed her with that during the first scope. I thought this whole time that the EE was one of the reasons she was throwing up. So... I really don't know what to think any more.
But, through a string of events with one of her meds (I won't go into the boring details!), I'm wondering if one of her medications is causing her to throw up. We started this certain med. about two years ago when the throwing up began and one of the side effects IS throwing up. So I talked to her docs (they weren't as convinced as I was) and we are going to try weening her off that medication and possibly give her a different one. I'll keep ya posted. I dream of the day that Jordyn doesn't throw up anymore (I'm sure she does too)! Hopefully that day is in the near future.

So, on to the fun stuff. It was finally nice weather and we took off for the zoo! I rented a double stroller for Carter and Evan and I have to say that was the best $6 I've ever spent! I think the big hit was feeding the goats and watching the sea otters. Most of big animals were all sleeping, but the kids loved the animals they did get to see. 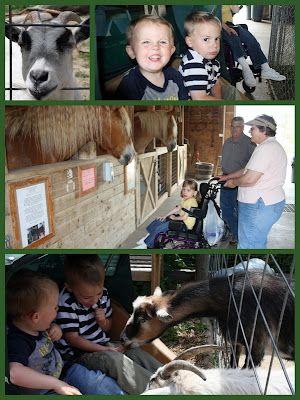 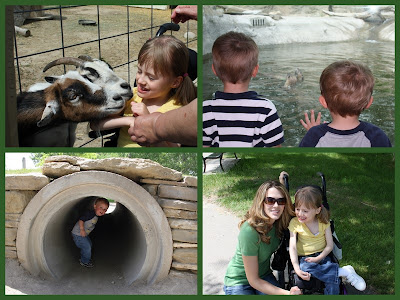 Just a cute pic of the boys actually being nice to each other! 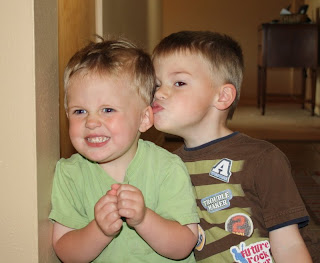 Now for my favorite part of our whole trip! A few weeks before we came, my parents sent me an article from their newspaper. It was about a family putting on a 10k Trail Run and 2 mile walk, in Red Lodge,MT on June 12. It was in honor of their 11 yr. old son, Mason, who had died a year ago, from a mitochondrial disease. They also wanted the race to honor all special needs kids and the proceeds were going to The United Mitochondrial Disease Foundation. When I read the article it just gave me goosebumps and I knew we HAD TO go!
Here's a link to the article: click here 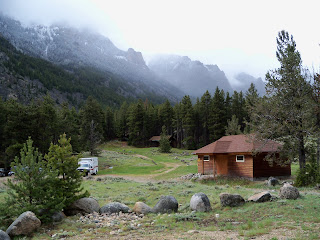 This is where the race was, Lions Camp in Red Lodge, MT. I think we all had our doubts as we were driving up there. It was rainy and cold. We wondered if many people would even show up. But, we had driven over an hour to get there, so we figured we better just go! There were quite a few people there and luckily there was a cabin with a fire for Jordyn to sit by. While I ran the 10K trail race, my dad took the boys and they did a treasure hunt that was put on for the little kids. My mom stayed with Jordyn by the fire. 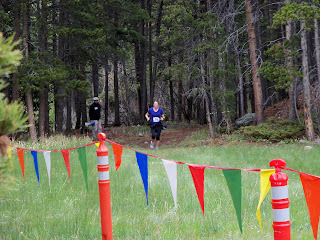 I really really loved the race! It was pretty challenging... the first 1.5 miles was uphill and there were plenty more hills after that too. But, there were a few downhill parts where you could catch your breath. I'm hoping I can find more trail runs to do in the future. It was kinda hard to come home and start running in the "city" again!
After the race they had a BBQ. We got to talk to the parents who had organized the event. Jordyn was the only special needs child there and Mason's mom kept telling us how grateful she was that Jordyn came. She said that Jordyn being there had made the whole event worthwhile. She even started getting emotional as she was talking to us. She went and got Jordyn a really nice gift from the treasure hunt prizes. A few of Mason's other family members also came up to us and told us how grateful they were that we had come and brought Jordyn. I think after talking to people, esp. Mason's mom, none of us had a doubt in our minds that we were supposed to go that event. I'm so glad we went! 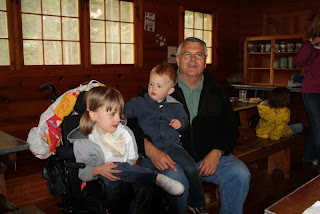 Grandpa, Carter, and Jordyn after the BBQ. 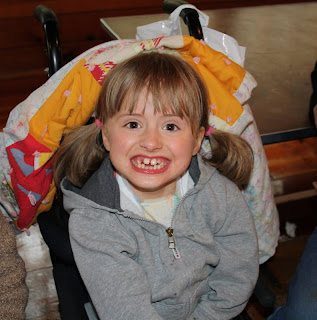 One of the best pictures of Jordyn EVER, I think! 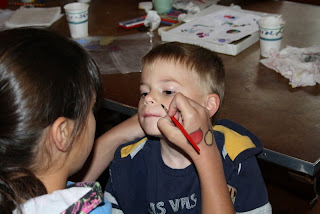 They had face painting for the kids and a pretty good band playing too. 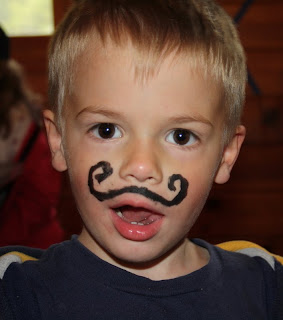 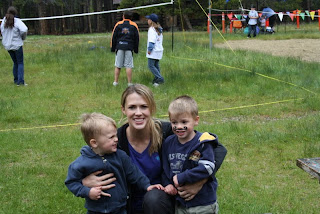 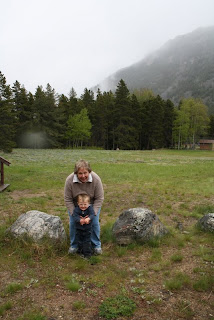 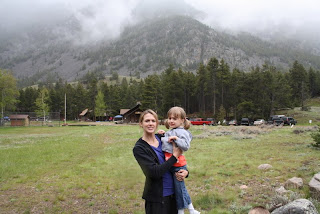 Love it up in the mountains, so beautiful!!! What a great day, can't wait until next year!

This is what we do in Wyoming

In May, we went to the branding for Pa and Ninny's ranch that they work for. There were tons of people there, so the work was not very hard and didn't take too long. I just chased the kids around and helped Ninny prepare some of the food. Ninny cooked/prepared the food for everyone to eat when they were done. 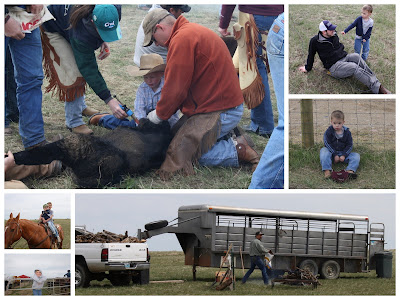 Evan kept getting mad about whatever and then he would go sit on the ground and pout. Had to take a few pics. of that! Oh, they also have a guy that works for them who is originally from Argentina. He makes a huge grill over a fire and then cooks tons of meat. Not sure what he puts on it, if anything, but it was awesome! 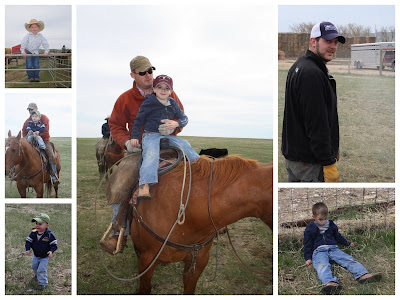 The first weekend in June, Ninny had her first "Kids Play Day" at their indoor horse arena, that they bought about a year ago. The kids can enter in all the events or just a few. They had calf dummy roping, goat tale tying, barrel racing/ poles/flags (on horses), and a boot race. 1st, 2nd, and 3rd place of each event won a little money. Then every one won some money on the boot race. Our boys were pretty excited when they won some cash! We all decided it might be really fun to market the event to "city slickers" that may have just moved to the area. Then their kids could experience Wyoming living! 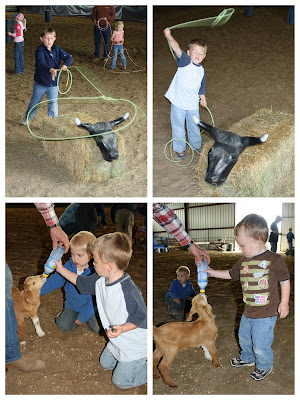 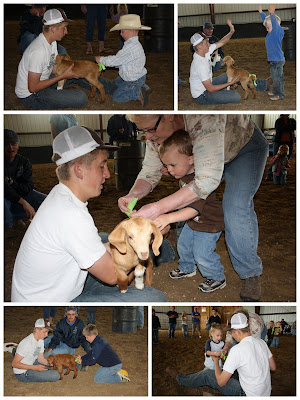 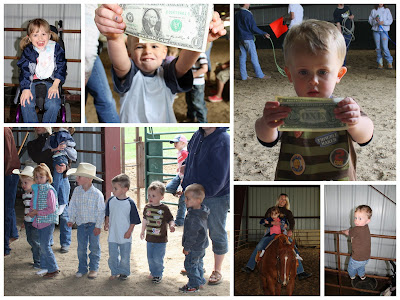 Here is my little catch up on recent photos and things we've been up to this spring!

The boys were playing with some safety goggles we had laying around the house and I thought the photos were pretty hilarious! 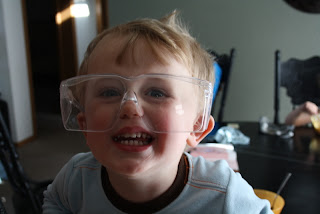 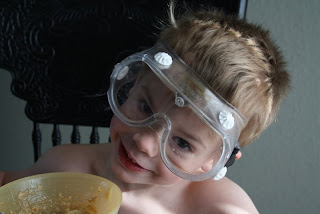 In May, we headed up to Billings for a few doctor's appointments for Jordyn. Seems like we've had a lot of those so far this year! Just check ups and a few minor procedures. Might have to write about those later. Most of Tom's family met us up there and we all went to the indoor water park. Always a fun time! In May, there are like FIVE birthdays in Toms family all within days of eachother, so at least we got to celebrate some of them all together! 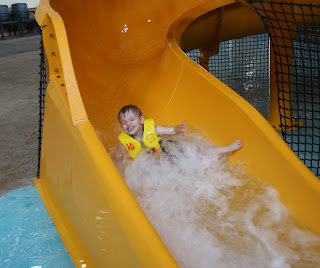 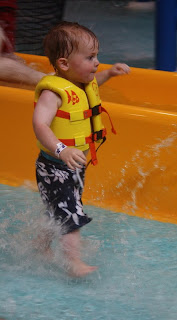 Ninny came to town to visit and got talked into pulling all the boys in a wagon. Carter, Clay, Evan, Cole. 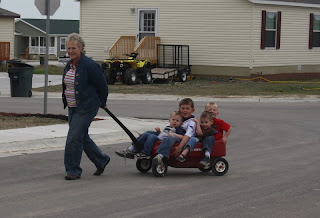 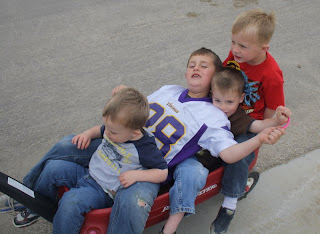 Ninny was nice enough to bring us some snow fence & posts to put up a makeshift fence until we get around to putting up a real one. I was about to go nuts trying to keep the kids in the backyard!!! Evan's always up to something back there as you can see in the pic. below. 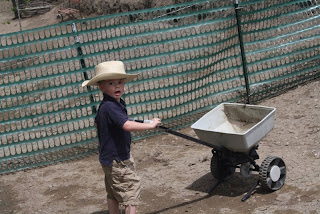 We've been to Buffalo quite a few times this spring. One of the weekends we went into town and the kids got to ride a mechanical bull. Our kids were too scared to ride so I just got pics of their cousins, Clay and Cole riding! 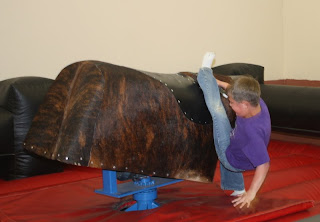 Jordyn thought it was very exciting! 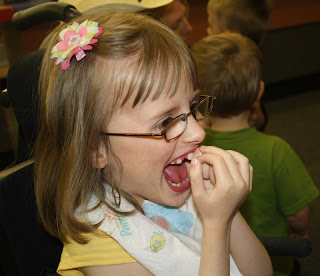 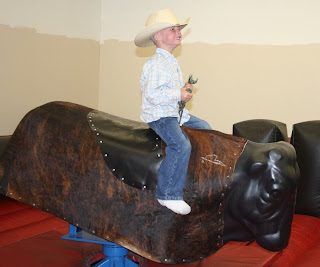 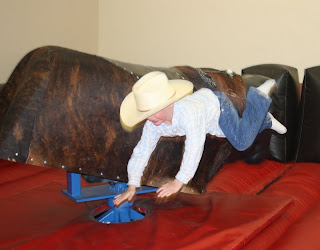