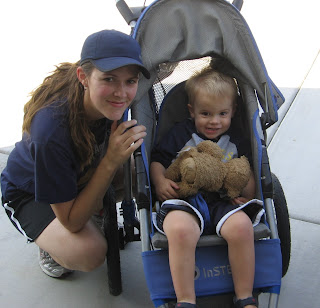 Here are some random photos from the past few weeks. First photo is Evan and I after jogging around to garage sales. I think we've gone about four times now. It's much more exciting to run to garage sales because then you know you have something to look forward to! 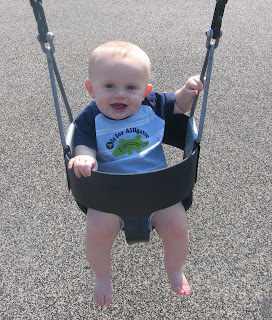 Carter swinging for the first time. 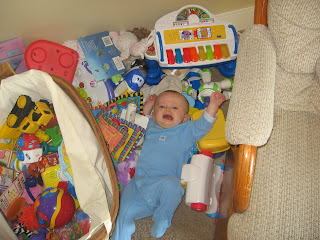 Carter is getting quite mobile and I often find him "stuck" in the corner with all the toys. He's probably mad that I took a picture first before helping him!

In other news, Jordyn's GI doc. suggested we try eliminating certain foods from her diet to see if we can stop her spitting up all the time. She may be allergic to one of them, but it's not showing up on the actual allergy test. First we have to stop milk for two weeks. It's been a week already and we haven't noticed a change. I never realized how many things she eats have milk in them!

We are also changing one of Jordyn's seizure medications to see if we can stop the small seizures she was having during her sleep. The transition off the old meds. and onto the new meds. take a few weeks also. She's only had a few minor side effects during the transition. For one day (last Sun.) she had about 5 tantrums during the day that were a side effect of the meds. These were crazy screaming bloody murder tantrums that she would have really suddenly. One was during sacrament meeting WHILE they were passing the sacrament and just happened to be right WHILE they were passing the sacrament to us! Talk about bad timing. But, she seems to be transitioning ok now!

I saved the best for last. It's video of Carter crawling for the first time today! He's been scooting like a little inch worm for a few months and it's like he just suddenly figured out how to crawl. And he's exactly seven months old. He's growing up too fast!

I wonder how many photos I'll have of Evan and Carter wrestling throughout their lifetime? Carter is learning to fight back as you can see from the top right photo! 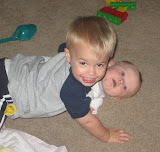 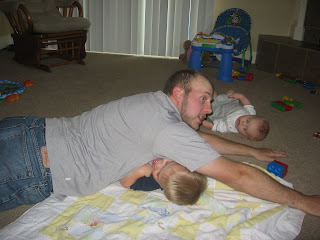 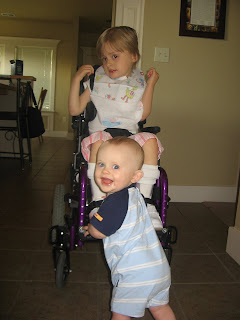 Tom teaching Evan what it feels like to be squished.

Here goes nothing! I wasn't going to post this, but Tom talked me into it. Maybe it will get all those "lurkers" to leave a comment! And I hope others put it on their blog so I can leave a memory about them. It's pretty fun to read all the memories people write on somone's blog.

Here are the directions:

1. As a comment on my blog, leave one memory that you and I had together. It doesn't matter if you knew me a lot or a little, anything you remember.

2. Next, repost these instructions on your blog and see how many people leave a memory about you.

We finally filled up the kiddie pool yesterday. We bought it last year and Evan would hardly get in it. This time he loved it! The water was freezing cold, but he didn't care! Now I'm really glad we have pool. All the kids are so happy when we get to play outside! 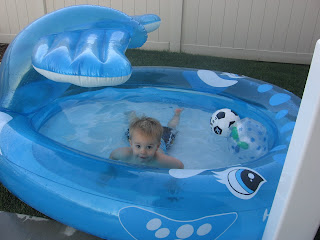 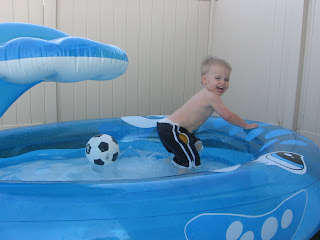 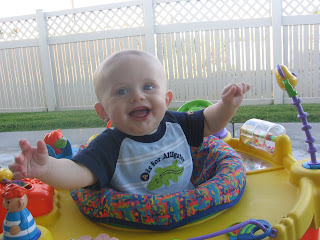 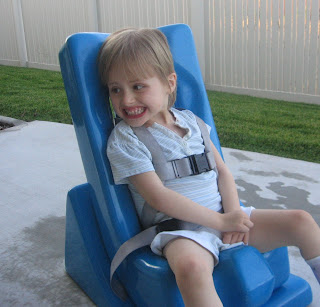 Our family took a four day weekend and headed to SLC for some fun and relaxation. Our main reason for going was Tom's Mission reunion. He served in Salt Lake City 8 years ago, for those who might not know. We actually stayed with a family (The Wilkin's) who were Ward Mission Leaders during Tom's mission. He's kept in touch with them over the years and they were kind enough to let us stay there!

On the 4th of July we had a BBQ, let off fireworks, and then talked over a bonfire in the Wilkin's backyard and listened to and watched fireworks going off around the neighborhood. 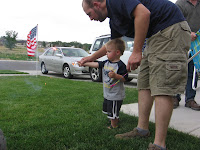 Evan with a sparkler. 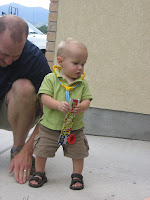 Lincon (The Wilkin's grandson) with fireworks. Lamar (the dad) being "patriotic". 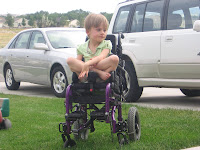 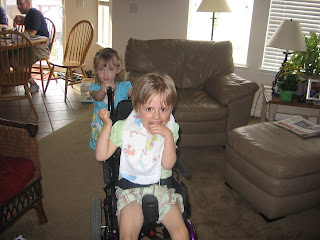 Aubrey (the Wilkin's grandaughter) pushing Jordyn. She was so cute with Jordyn. 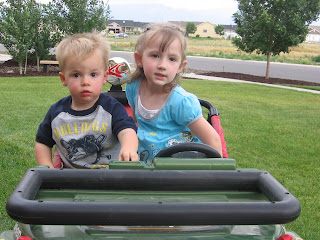 Evan and Aubrey riding in a toy jeep. Evan loved it! 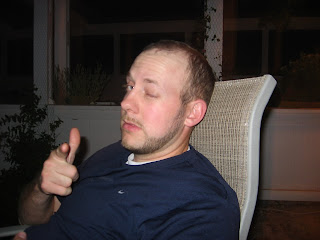 Tom sitting by the bonfire. 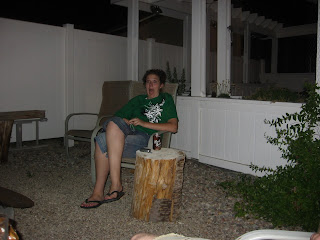 Aneesa (The Wilkin's daughter) sitting by the bonfire. 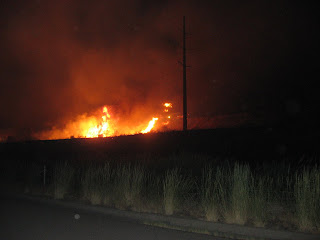 On the 4th as we were sitting by the bonfire we heard lots of sirens and figured someone started a fire with some fireworks. Then we could see a plume of smoke and an orange glow only a few miles away. It looked pretty bad. So, a few of us hopped in the car and drove to see what was going on. Sure enough, right off the interstate there was a really bad fire that started from the city fireworks show in Magna. We were literally driving right along side the fire... it was crazy. This was the best picture I got of it. There were telephone polls on fire too. Some parts were worse then others, but I would say it had to have been a mile long! If you want to literally see what we saw, click here... someone got some video footage of it. The people on the video had the same reaction we did!
Saturday we took off to see my brother Dave and his wife Mel in Sandy. We went to a really cool waterpark with an awesome area for kids. Evan went down this one kid waterslide about a million times... he loved it. 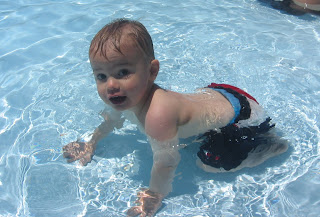 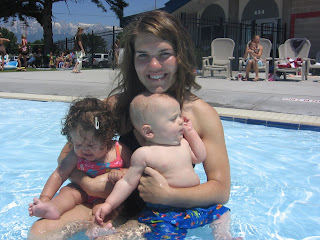 Mel with her neice and Carter. 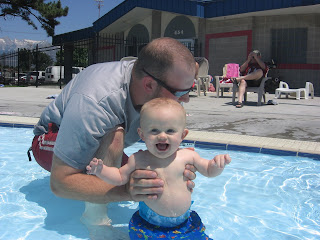 After swimming, Dave and Mel watched Jordyn and Evan for us (thanks again guys!) and Tom, Carter, and I went to Tom's mission reunion. They had it at a church building in Lehi. When we walked in Tom's mission president said,"There's my cowboy!" We ate some food and just visited for a few hours. It was good to meet some of the people Tom is always talking about and telling stories about from his mission. I think everyone had a good time catching up! I didn't take any pictures at the mission reunion so I dug up some photos from Tom's mission. 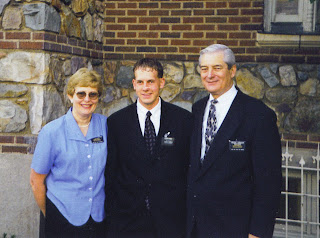 Tom and the Mission President and his wife. 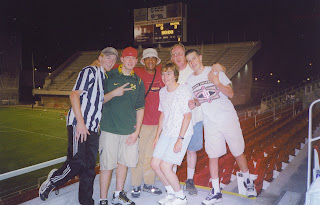 I had to put this picture of Tom and The Wilkin's from his mission. They were actually talking about when they went to a soccer game, so I was surprised to find this picture! From left to right: Jason Wilkin, Tom, Tom's mission companion Raja (he was at the reunion but actually lives about 20 min. away from us!), Julie Wilkin, Lamar Wilkin, and Eric Wilkin.
Sunday morning we stopped to say goodbye to Dave and Mel again before they went to church. We decided to check out IKEA before we left. Very cool store. I got a bunch of little things and we were there for 2.5 hours! I can see myself stopping at that store every chance I get. Then we attempted to stop and eat at Cafe Rio. We keep hearing people talk about how great it is... but sadly it was closed! So we ate somewhere else and then headed for home. Tom took the picture of me below. He said he need to document me ACTUALLY driving on a trip! I'll admit he drives most of the time, but on the way home I drove 75% of the way because Tom was too sleepy, poor baby!
We had a great time and it was fun to see family and friends. I said on the way home that we really need to take more weekend trips. It was fun! 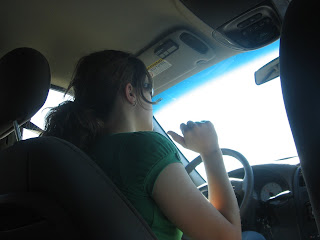 Jordyn had a neurologist check-up last week. At the very last minute I decided to tell them about some weird behavior I had seen Jordyn do a few times. 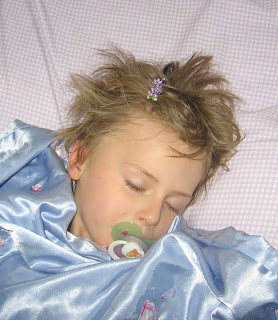 She'll be asleep for about 10 min. and then startle awake, straighten her arms, and look frightened. She doesn't make any sound and falls asleep after only 5-10 seconds. The neurologist will usually say,"Let's keep an eye on it." Not this time. It was a new physician's assistant and she wanted us to do an EEG! I wasn't expecting that and wasn't very happy about it either. EEG's are obviously time consuming and inconvenient. We've done about a million EEG's trying to catch Jordyn having seizure activity and we NEVER have. For a few days I even contemplated calling the doc. and telling them I didn't want to do it. But, since it's almost been a year since we've done one I figured we'd go and get it over with. So, this morning we headed down to the hospital for the test. Sure enough, after falling asleep for about 10 min., Jordyn startled awake and didn't exactly what I described! YEAH! I was so happy. I really think this is the first time we have EVER gotten seizure activity (if that is in fact what it is) documented on an EEG. I don't think it's too big of a deal and who knows what the doctor will do about it, maybe nothing. I guess we'll find out in a few weeks. I posted a cute picture of Jordyn sleeping after we got home. They sure make a mess of Jordyn's hair during the test. We had to run a quick errand afterwards and I threw a barrette in Jordyn's. I don't think it helped. I'm sure people were still wondering why I don't comb my daughter's greasy and totally messed up hair!
Oh, we also went to the allergist last week to see if her throwing up is caused by an allergy. No luck...the doctor said he is confident that she isn't allergic to anything. I guess we might be dealing with the throwing up longer than we thought. I guess that is life sometimes.... you win some and you lose some!