Carter is so cute sometimes I can hardly stand it. I always come into the living room and he's laying on the floor watching tv with his hands on his chin. It's just so dang cute! I also can't believe right now how much he copies Evan. It's ridiculous! He follows him around like a little puppy dog, saying and doing everything he does (good AND bad things). For example, Carter could be scarfing down his favorite dinner and then he'll hear Evan say,"This is yucky!" Then Carter will shove his food away and say,"This is yuck!" OR Evan will say,"I have to go potty." Then Carter says," I go potty." ... even though he is still in a diaper. (sigh) We just laugh about it A LOT! 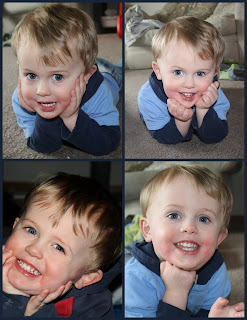 This is kind of late, but I forgot to post a picture of Evan's valentines we made. He has been going to preschool a few days a week at a friend's home. We made these for his Valentine's party. I got the idea from my friend Holly and she got the idea from some one's blog. I loved it and glad I got to use the idea! I love the way the picture turned out because they way Evan is standing and the smile on his face just matched his personality perfectly. Call me crazy, but I even made Jordyn's valentines this year too. I forgot to take a picture and they turned out so cute. I got the idea from our library's story time. It was a puppies face made out of paper hearts and the dum dum sucker was the dog's tongue. Kinda hard to picture but it was super cute! 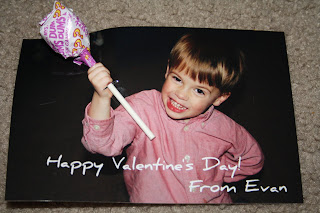 I don't know about you, but I tell my kids I love them about 100 times a day. They are finally at the age where they say it back! Evan just started to say,"I love you sooo much!" out of the blue!!! Awwww melt my heart! There is just something about them saying it without any prompting. Evan will also say,"I love you sooooo much, as big as a giant!!!" LOL So, in our house, we hug a lot and say I love you a lot too!

I guess it's one thing I try really hard not to take for granted. I always WISH Jordyn could hug me and say,"I love you." So, I feel like I've been waiting a long time for one of my kids to be able to do those things. Your mind and body has the desire to connect with your child in that way. You want them to WANT you, reach out for you, hold your hand, hug you. Luckily, Jordyn loves snuggling with us. It's not quite like them wrapping their arms around you and squeezing you, but for Jordyn it might be the closest thing she can do. If she's crying, snuggling makes her stop crying and she lays her head down on your chest. And occasionally she will hold onto your finger or hand too. I guess I should feel lucky because most six year olds won't snuggle with you for very long! Oh, and the other night Tom was making Jordyn laugh by leaning into her face and making kissing noises. She actually leaned forward like she was TRYING to kiss him. We were so shocked! She probably did it 4 times in a row (giggling the whole time) and then accidentally head butted Tom on the last one!

One more thing that I love? A new dessert recipe I tried! If you haven't heard of The Pioneer Woman, then you should be spending more hours on the computer like me . I haven't tried too many of her recipes, because they are a little, um.... fattening!!! But, that is why they taste so good. I saw this recipe on my friend Cheri's blog and thought I would try it.....oh boy is it gooooood! It might just be our new "go to" dessert now. It's so quick and easy too! Enjoy!

Preparation Instructions:
Peel and core apples. Cut each apple into 8 slices each. Roll each apple slice in a crescent roll. Place in a 9 x 13 buttered pan.
Melt butter, then add sugar and barely stir. Add vanilla, stir, and pour entire mixture over apples. Pour Mountain Dew around the edges of the pan. Sprinkle with cinnamon and bake at 350 degrees for 40 minutes. Serve with ice cream, and spoon some of the sweet sauces from the pan over the top.
WARNING: Prepare this dish at your own risk. It is beyond imaginable.