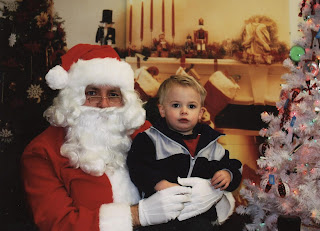 I had to get on and blog about Evan. He is changing so much lately that I wanted to record some of the things he's been doing.
We took him to see Santa a week or so ago. He was pretty reluctant until he saw that you got candy. Then he was fine with sitting on Santa's lap! (Pretty good for a free Walmart picture don't you think?) He also sat on Santa's lap at my parent's ward Christmas party too.... once again for the candy. Now he loves talking about Santy Claus, as he calls him. I'm also proud of Evan for learning to say and talking a lot about "Baby Jesus". But now he thinks every picture of a baby is baby Jesus!

I think I know what people mean about the "terrible two" stage. We're there. Evan is really testing my patience, but then he counteracts it with wanting hugs and kisses all the time! I'm glad for those times we snuggle, hug, give loves, and just spend quiet time together. Otherwise I'd go insane!

Evan is loving that fact that he can play with our digital camera now. We're getting a new one for Christmas so we let Evan have free reign over the old one. He is getting really good at taking pictures! Here's a little sample of his photography:

haha, that was cute! he sure is growing up fast!

Grandma's pantyhose. Oooo, she won't be able to live THAT one down, will she.

ps - Momma K, your wall color turned out great in the living room!

Quite the budding young photographer! You should make a photo album of his "work"

What a handsome boy and he is getting so big!

The question stage is a fun one - ha ha but it is definately how kids learn about the world - curiosity is a GREAT thing:)

Can you send me your address? cheriebakow@hotmail.com

Our two-year-old is doing the same things! He is alternately adorable and a devil. It is such a funny age!

I love the new photographer in your family. How cute was that. I once looked at my camerea and there was a picture of Andrew ans our dog Rahjas nose and that's it. I still just love that picture. Merry Christmas.