This is Tom I've hijacked Emily's blog for the moment...not really actually Emily says she is too ill at the moment to finish part two of her halloween blog, so she has given me the oppurtunity to put a new blog on my page so check out my blog to see pics of the kids halloween...Enjoy! 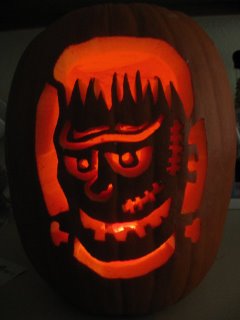 (My pumpkin... it's Frankenstein if you can't tell.) TO BE CONTINUED...

Question of the Week!

Would you rather: Marry your first boyfriend/girlfriend - OR - marry someone your parents chose for you? 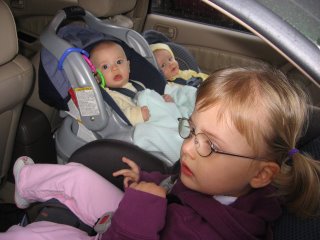 On Monday and Wednesday morning I pack all three of the kids into the car and we take a short drive to put Jordyn on the bus to go to school. I think the kids really like going on this little outing. It will be really fun in the spring when it's warmer and the babies are older and can get out of the car and watch Jordyn get on the bus. Today when we were waiting for the bus, a lady came over to admire the babies and she thought they were twins! 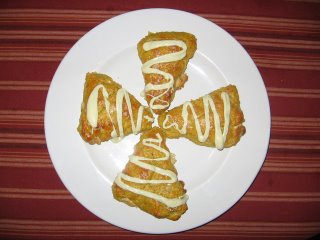 After going to my cooking party on Friday night, I was really in a baking/cooking mood. (It was a party for a fairly new company called "Demarle" - they sell flexible bakeware designed with a combination of woven glass and food grade silicon. Subway, The Cheesecake Factory, and Oprah all use the cookware. It's pretty cool stuff, just very expensive!) So, I decided that I wanted to bake something I've never tried before. I decided to make pumpkin scones! Tom thinks I'm wierd for taking a picture of my food, but I couldn't resist. I'll do anything for something new to blog about! The scones were pretty tasty so I'll include the recipe:

Preheat oven to 400 degrees and line a baking sheet with parchment paper. In a large bowl, whisk together the flour, sugar, spices, baking powder, baking soda, and salt. Cut the butter into small pieces and blend into the flour mixture with a pastry blender or two knives. Stir in the chopped choc. and pecans. In a seperate bowl, mix together the buttermilk, pumpkin puree and vanilla and then add the buttermilk mixture to the flour mixture. Mix just until the dough comes together. Do not overmix.
Transfer to a lightly floured surface and knead the dough gently 4 or 5 times and then pat the dough into a circle that is about 7 in. round and about 1 1/2 in. thick. Cut this circle in half, then cut each half into 3 triangle shape wedges. Place the scones on the baking sheet and brush the tops with the egg wash and sprinkle with the sugar.
Place the baking sheet inside another baking sheet to prevent the bottoms of the scones from over browning. Bake for about 20 min. or until golden brown. Transfer to a wire rack to cool. ( I melted the leftover white choc. and drizzled it over the tops of the scones.)
Makes 6 scones.

Don't you just LOVE having clean carpets? Our carpets were driving us CRAZY because they were so dirty. Well, backing up a little bit, we actually had a little flooding accident a month or two ago. Our neighbor who lives above us flooded her bathroom (her kids were dumping water out of the tub, onto the floor!) and it started dripping through the ceiling into our apartment in several spots! We cleaned everything up the best we could. One spot on the carpet got very wet and we thought we soaked it up well enough. But, now there is a huge dark spot where the water was and we were worried there could be mold underneath. So, our carpets are being cleaned right now. Evan is asleep (hopefully still asleep even with all the noise!) and Jordyn and I are hiding out in the bedroom.
Our neighor flooding our apartment is just ONE of the MANY MANY annoying things she has done. She is one of those neighbors you pray and wish you NEVER get! haha I could tell you stories upon stories about our neighbor, but it would take me all day. Hopefully there is no way she could come across this blog!
Tom is gone until tomorrow afternoon. He went up to a cabin with a few of the young men and leaders. They were going to shoot guns, play videogames, and ride motorcycles - a guy's dream day I guess! We have the babysitting co-op tonight, so I am taking the kids there and going to a cooking/baking party (like Pampered Chef, but a diff. company). Then tomorrow morning we are going running on the Centennial Trail with Susan. After that, I think we will just be lazy until Tom gets home!

Question of the week.

Most of the time, I use a book called "Little Book of Stupid Questions", as the source for Question of the Week. This week I am getting my question from a fun board game we have called "Zobmondo - That Crazy 'Would You Rather' Game". The object of the game is to advance to the middle of the game board, by predicting how friends will answer outrageous, gross, thought-provoking, and hilarious "would you rather" questions. For the questions, there are five categories: Pain/Fear/Discomfort, Appearance/Embarrassment, Food/Ingestion, Ethics/Intellect, and Random. We have only played it 4-5 times and I don't think we've ever used the game board! We always end up going through all the question cards and debating/laughing/talking about all the wierd questions.
So, we'll see if one of these questions is fun to do for Question of the Week. It comes from the Food/Ingestion Category:


Would you rather: While dining in a restaurant, catch a glimpse of a dead rat -OR- catch the chef sneezing into his hands while preparing the food?

It's only 3:30pm and we've already had a crazy day! This morning I had to take Jordyn to get her blood drawn for a few of the tests that the doc. in Seattle wanted done. (I know, I know, I procrastinated taking her in for 2+ weeks!) Actually I took her in a week ago, but they ended up making errors on the labs and had to re-do them.... a story for another time. Anyways, Jordyn did pretty well getting her blood taken and she is glad it is over.
The hardest part about taking the kids somewhere by myself is getting them through the doors! Literally, getting them through the doors! I am always complaining about this to Tom and everyone else who will listen to me. I hate going to places now that don't have handicap buttons on the doors or automatic doors. And trust me, I have memorized ALL the places that do not have doors that I can easily get me and two kids through. Just imagine carrying Evan in one arm, trying to push and hold the door open with my body and then trying to push or pull Jordyn through the door. It's prob. quite hilarious to watch. And it seems like someone is ALWAYS watching. 90% of the time people always run over and try to help me, which is very helpful and embarrassing at the same time. I am sure it is much like trying to get a stroller through the doorway also. So, lesson to everyone. If you see a mom struggling to get through a door, go help her!
After we got done at the lab, we went to pick up Jordyn's glasses! I was thinking in my mind,"Oh good, the eye clinic has a handicap accessible door, so I won't have a problem taking both kids in." (I know it's weird, but I really do think about this before I go places!) And sure enough, the button was broken! I just started laughing, because I had just struggled through all these doors at the hospital (and what hospital doesn't have handicap doors??) and now the ONE door that has a button, doesn't even work! hahaha And of course there were like 3 people in the waiting room watching me try to get through the door.. and one finally came over and held the door for me. So, Jordyn got her glasses. She didn't really like trying them on! But, she is already getting used to them. I think they look pretty cute!
It's pretty crazy how running two errands took me almost all morning and when I got home I was ready for a break! At least the kids behaved well while we were out. I think Evan might have to learn to ride on Jordyn's wheelchair with her!
I included two other photos. One of Jordyn and Evan together and one of Evan eating his first vegetables. He likes to put his hands in his mouth and then smear the food everywhere. 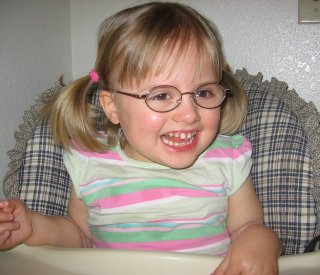 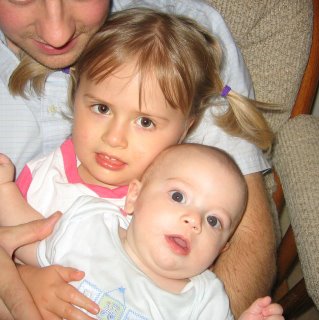 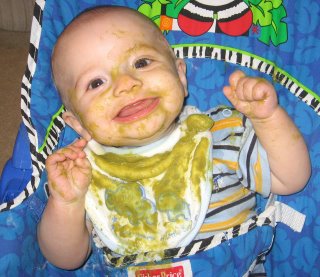 Question of the Week.

Ok, so I haven't been very good about doing a question every week. Oh well. I think I'll just do them whenever I feel like it....