I thought I better post something before people stop reading my blog! Kind of a quiet month, so I just posted some of the pictures I've taken recently. 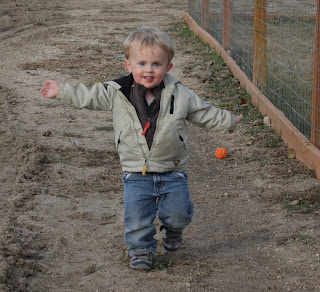 Cute little Carter running to give me a hug! 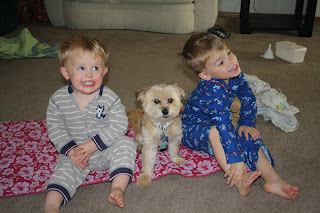 A little while ago we babysat Krystal's dog, Joey, for a night. Of course the kids were loving him....and probably torturing him at the same time! I got a few cute pictures of them together. In the first picture they are sitting on my yoga mat. Evan insisted that Joey wanted to lay down on it for a bed. Evan was quite the little care taker with Joey! 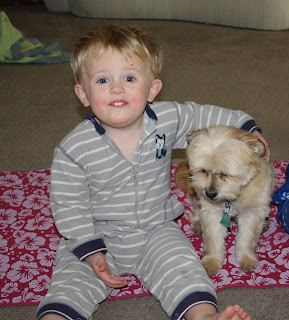 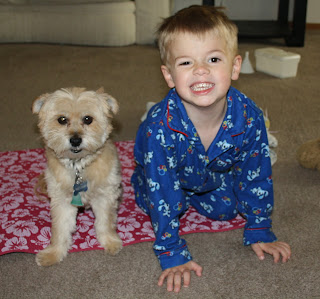 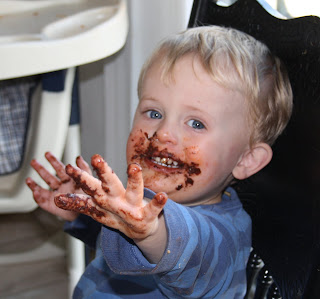 Not sure what Carter was eating, but he made a mess as usual. The kid loves food! 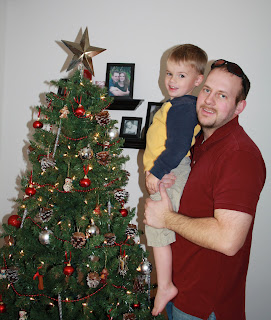 Even more recently, we set up the Christmas tree this weekend. Tom even put Christmas lights on our house too! Really cute picture of Tom and Evan putting the star on top, isn't it?
We had a really great Thanksgiving too. Tom was on call for the weekend (he never did get called in) so we had to stay in town. We had Thanksgiving at Travis and Linda's house. Tom's parents, Chae's family, Krystal, and Travis and Linda's good friends all came for the whole day. Of course we stuffed ourselves and then played a bunch of games. A pretty great day! 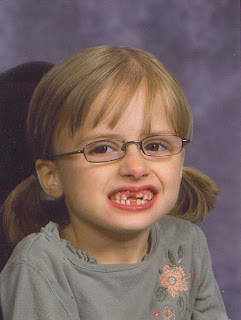 Can't leave Jordyn out! I just love her funny smile in her school photo. Way to show all the teeth you've lost Jordyn! Gotta love it.

I love dressing the kids up in a "theme". Who cares if they had no idea who the characters were, they still loved it! I actually went to the library and borrowed Peter Pan so they could watch it. Carter could have cared less and Evan watched most of it. I watched a little bit and wondered if I have ever even seen the movie! It sure didn't seem familiar. It's one of the older Disney movies and they are just so different and almost unusual in a way! And I have to say that I spent a total of $17 on all three costumes. The best was Evan's.... it cost $1. I found the pirates set at the dollar store! Not too bad!
We had a great weekend with Tom's family. Chae and Misti came from Sheridan and Tom's mom, Glenda, came from Buffalo. We played games on Friday night at Travis and Linda's. Oh man, that was fun. We now have an inside joke that we'll probably be laughing about forever. It's still cracking me up. Sorry, can't write about it on here! Guess you'll just have to go crazy wondering what it is!
Saturday we had a little birthday party for Chae and Misti's son, Joseph. Then had pizza, went trick-or-treating, then went to a little Halloween carnival that the city puts on. It was a GREAT Halloween!
Yes, Carter has TWO Halloween bags in the picture! He was so cute marching around to all the houses. I would try and get him to catch up to the other kids and tell him to RUN! Then he would run as fast as he could (more like waddling) to catch up. He didn't want to miss a house! Oh and he was just in AWE after he got all that candy! He was such a cute CHUBBY Peter Pan! 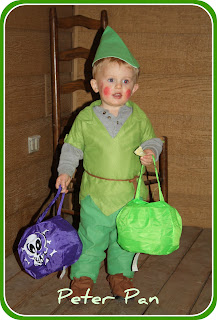 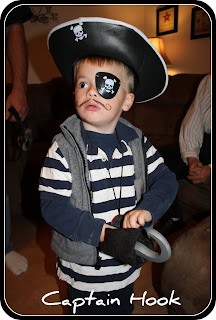 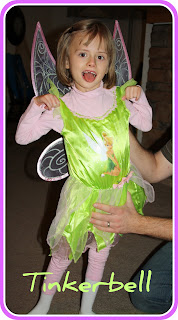 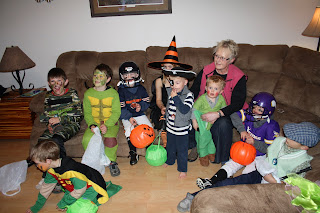