Well, bad news. I don't think I'm getting my money back. The bank wrote me back and said they recommend that customers print or save a copy of their statements they receive online to avoid having to order them. They charge because they've already provided you with one copy online or by mail. I guess it would makes sense to save them on your computer and then you could print what you needed in the future.

I seriously contemplated going into the bank and threatening to leave the bank, but then I decided I was WAY too lazy to ACTUALLY do that! I just can't bring myself to deal with the hassles of switching.

I highly doubt the people requesting these statements would do anything if I complained to them. They are in fact giving us money for Jordyn! Now that I look back, I should have done things differently. But you never think of those things until AFTER the experience. I guess I definitely learned from this, didn't I?

I really need to vent. Jordyn receives a small (but helpful!) disability payment every month. And every year we have to do a review over the phone. That's perfectly fine. They just update our info and ask me lots of questions about our assets, income, monthly payments etc. That's fine too. At the end of our conversation the lady tells me that she needs to see two years of bank statements for every checking/savings account we have. Huh? OK... Luckily we don't have many accounts!

I found 18mo. of statements online...now I'm low on computer paper and ink! So I still needed 6 mo. of statements. Called my bank and was told it would be $6.00 PER STATEMENT. That is over $70!!! I called the lady who did our review and told her that. Her response,"Well, I have to have them." So I went to my local bank thinking that there was NO way they would actually charge me that much. Maybe they would help me out and charge me $12.00 or something? NOPE. They actually charged me $72.00!!!!! I tried to protest, but they weren't helpful. I left so furious I thought I was going to explode!!! How can five minutes of their time and a little paper and ink cost them $72.00? CRAZY. (It didn't help that my kids were HORRIBLE the whole time!)

After I left, I kept thinking..."NO, I am NOT paying this. Someone is going to reimburse me!" So, after wondering who to lodge a complaint with (the bank or the person requesting the statements)... I decided on the bank. I figured they are much more likely to take that ugly charge off my account if I complain. I already e-mailed them and it said I would receive a call within 24 hours. Can't wait to see what happens! What do you think? Am I crazy for throwing a fit or am I right in thinking that charge was crazy??

Just come cute photos that I've taken over the past few months. Below is Evan jumping in a huge puddle when all our snow started melting! I figured it was safe because he had snow pants and boots on...and I wanted to take pictures. Now he wants to jump in every mud puddle he sees. Oh, and don't worry...all the snow melted awhile ago and it's going to be in the 70's this week!

Carter in his little cubby hole. He always gets stuck in there. I think it's supposed to be for a computer modem...I don't know what to use it for because we have a laptop. Any ideas? I guess it's always great for playing! 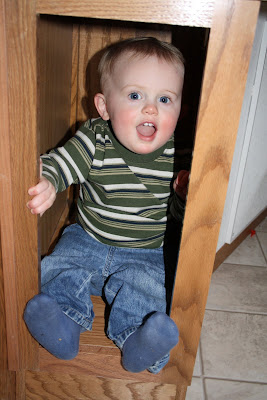 Aww I love this. One day Carter was so tired that he fell asleep the second he was done eating. Then again, maybe he fell asleep because he was tired from eating so FAST. He's like the Tasmanian Devil when he eats! He was out cold. 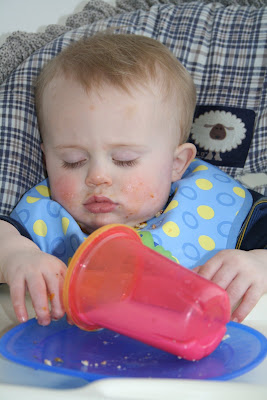 I guess this post is turning into a post all about Carter! He's our little stuffed animal man. He loves any stuffed animal! When he goes to bed he has to have 2-3 stuffed animals in bed with him. And when I get him up in the morning he wants to bring them with him too. It's so cute because he hugs them all the time. This week Carter also learned how to say "no". Sometimes you wonder where your kids learn certain words. Not this one! He most definitely learned it from us! I bet it's one of the first words most kids say, don't ya think? He really doesn't understand the meaning of it yet because he just says,"Noooo." when you ask him anything! It's pretty cute, just like him. 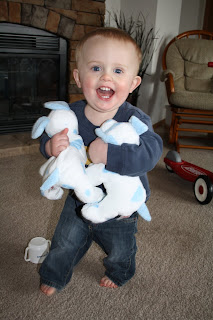 We had a great Easter. We went to Tom's parents and met up with the entire family! We dyed Easter eggs and had an egg hunt for the kids. Then we had a delicious prime rib dinner. And of course we went to church on Easter Sunday. Jordyn and her cousin Megan are the only girl cousins in the family and Ninny bought them beautiful dresses to wear on Easter. They looked so cute!
The weather was great too! We took the kids on a hike and got a great view of the entire ranch. Evan was a little trooper going up steep rocks and hills. Sadly I didn't have my camera! I even made Tom take me shooting. I have only shot a gun one time about 7 years ago. Tom always goes out shooting when we go to his parents and I always say,"When do I get to go?!" It was pretty fun and I did pretty good if I do say so myself. I shot a 6in. target at 250 yards. Two shots and two hits! Tom was impressed:)
Hope everyone had a great Easter weekend! 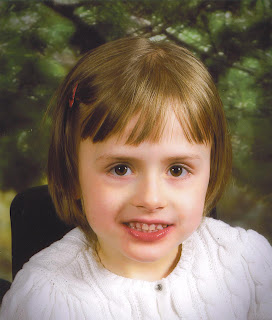 Finally! A really cute school picture of Jordyn! I was so happy when she brought these home from school today. If you know Jordyn at all, you know that taking a good picture of her is all about timing and LUCK! It's very hard to get her to smile when you want her to and to not irritate her during the process. Yay, Jordyn, for taking a great picture!!!

Hey everyone....one of my friends just launched her own website (she's also married to my brother's best friend). Go check it out... it has some great ideas and tips!