The kids got a little sled for Christmas. When it was finally warm enough outside, we took Evan for his first sledding adventure. We thought it was still too cold for Jordyn and Carter to come along... and they were sleeping anyway.
So, this first picture cracks me up. You can see that Tom is heading towards a small mound a.k.a. "the sledding hill". Now you're probably all squinting or trying to enlarge the photo to see what I'm talking about. This park is one block from the home I grew up in and we went sledding on this "hill" our entire lives. I honestly can't believe how small it really is! It seemed like when we were little we were flying down the hill so fast and we had so much fun! Seriously... could it have shrunk? Oh well, it's a good hill for a two year old I guess! 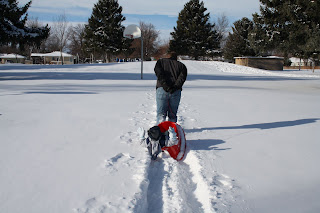 Good thing it's only one block! Pulling a kid through the snow is harder than you think! 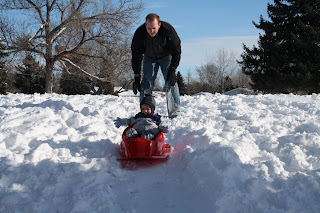 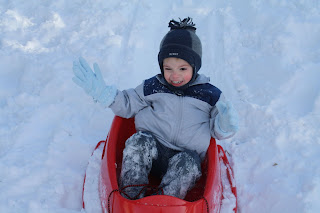 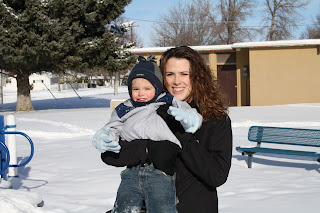 Evan was a little more interested in playing on the playground equipment than sledding. He would FLY down the slides because they were cold and slick! And he had a great landing spot in the snow at the bottom. He loved it! 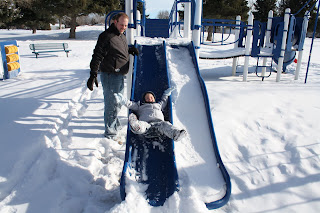 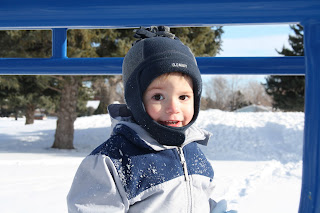 The first movie is Evan going down one of the slides. The second movie is when we told Evan that it was time to go home...he wasn't very happy.

How cute! You guys have alot of snow - Woo Hooo!!

That is so funny about the hill. I remember visiting one of my childhood homes as an adult and it was so tiny but when growing up it felt enormous.

I guess things look bigger when you are little!

I swear that hill used to be bigger too! Remember the winter we learned to "snowboard" on our sleds?? We thought we were so cool but it was soo hard! Man we were nerds! And remember "ice skating" in our keds the year they had the rink there?

looks like you all had a great time. I love new years eve and just having fun with the family. I can't believe Cater is one. they grow up to fast. Happy New Year !!