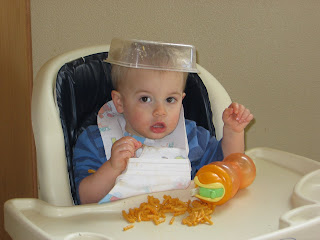 If this picture looks familiar it's because we have about 10 different versions of it... Evan dumping his food out and putting the bowl on his head! (That is why I just can't bring myself to move him to a toddler chair yet, but I really should!) Another new habit he has is during his night time snack. We give him a little bowl of cheerios and milk. Then he picks all the cheerios out, puts them on his tray, drinks the milk out of the bowl, puts the cheerios back in the bowl, and then eats them. Interesting way to eat a bowl of cereal! 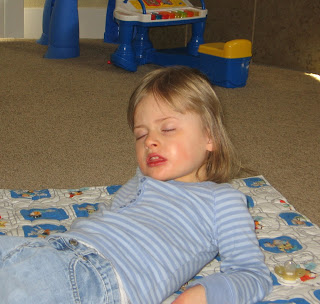 Poor little Jordyn has been sick the past few days with a fever. It's so sad when she's sick because she seems to get really sick and for a long time. But strangely, instead of being grumpy she is always really quiet and happy! So, that's nice for us I suppose. I took this picture of her the first day she was sick.... she fell asleep like this! She just wouldn't lay down to sleep! 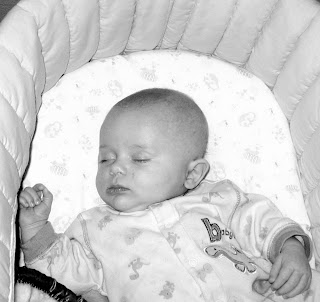 I couldn't leave Carter out! I think I say every day that Carter is getting cuter and cuter. I think those first few "hard" months are over. He is getting on a schedule and we're figuring out how he likes to fall asleep and what he likes. He's sleeping longer at night too which is great! He's a little angel.

Your family is growing up right before our eyes.