Here's a recent photo of Carter. Don't you just want to kiss him to death? He is a pretty good baby so far. I say "pretty" good because he is getting in the habit of wanting to be held while he falls asleep! And he doesn't really like his bassinet all the time. But, I shouldn't even complain, he really isn't too difficult. 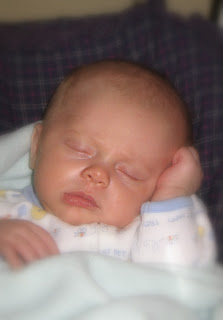 This past Saturday we attended our ward "Preparedness Fair". It had four different classes (water storage, gardening, 72 Hour Kits, and Finances) on being prepared for a natural disaster or anything that might greatly effect your life. It really made me think about how much we need to do...mainly get started on food storage and 72 hour kits. It also motivated us to re-do our budget and make new goals. They had activities for the kids while the parents went to the classes. At the end of the fair, they had a fire truck and firefighters for the kids. The kids loved it! 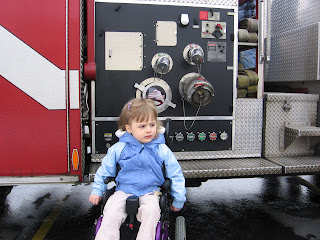 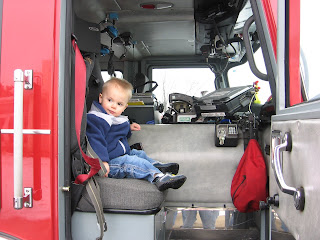 I almost used this picture of Evan for our Christmas card. He looks so handsome and grown up! I just can't believe how funny Evan is. He definitely keeps us laughing all day long. He tries to copy what we say and imitates sounds we make too. He just has the funniest and most silly personality. When we pick him up from the nursery on Sundays, you can tell he is the life of the party and entertains the teachers too. He is even pretty social ... we don't know WHERE he got that from! He will talk to and play with anyone... even adults. One of the funniest things about Evan is the way he talks. He just has his own language and knows exactly what he is saying... but we just can't understand it! It's hilarious. Oh, the second photo below is of Evan walking around with his pants on his head! The video is of Evan being funny while swinging in the baby swing. Does anyone else HATE the way they sound on video recordings? I DO! Is that what I really sound like? Tom says yes, but I'm not willing to except that yet... I sound so wierd! 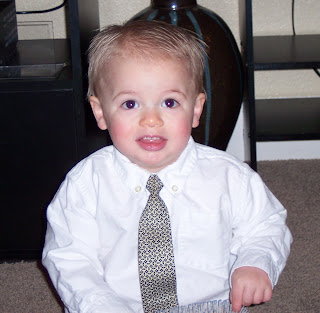 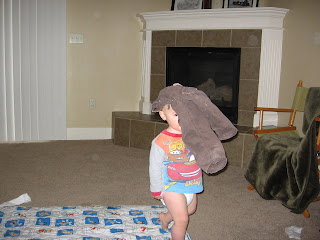 Ok, it's been way too long since I've seen your kids in person. They are so cute!! I would love to hear more of Evan's language. It's hilarious!

I can't believe how much Carter has changed since his last picture. He looks more like Evan now. I do want to kiss him right now!

The video of Evan was very funny.

1. I like the photo of Carter, it looks so "angelic"
2. Evan's sillyness reminds me of Liam.
3. And I didn't know they made neckties for 2 year olds, how funny!

Cute video. I remember when Kylee use to spend more time in the swing then Emilee did when Emilee was a a baby. Cute kids

Wow. Thanks for the video. I forgot how weird your voice sounds.

(just kidding - it was very funny to hear Evan. He does remind me of Liam.)

Emily, Carter is the most precious little boy ever. I LOVE the picture...

I don't think that really sounds like you. I think videos make everyone's voice sound lower.

And those are very cute pics of your kiddos. They're all sooooo cute! Including the one above with baby Carter.