Well, we have survived our first two weeks with a new baby! Actually, it's gone quite well. I actually hesitated even blogging about it for fear that I would jinx myself! I can't believe I'm saying this but, taking care of three kids is not as hard as I thought it would be. I guess when you fear for the worst, anything seems better. I'm obviously tired because I have to wake up several times a night, but despite that, we are managing really well. We got some tasty meals from our ward earlier this week, which is always great. I do feel like I am WAY busier now. I have to constantly plan every second of my day so that I can get things done. If Carter is asleep, I go into "work mode". I try and get as much done as fast as I can because I know I only have a few hours. So, two weeks down, only 18 more years to go!

We finally got a good snow fall a few days ago! I usually don't like snow very much, but I was glad to finally see it. I wish we could go sledding, but 1. we don't have a sled & 2. Someone has to stay home with Carter. I guess Evan and Jordyn will have to settle with the back yard! I took Evan out the other day while Jordyn was at school. I think it's the first time he's really gotten to play in the snow... last year he was too little. He wouldn't wear gloves and didn't mind his hands getting frozen! We made a snowman and had fun! 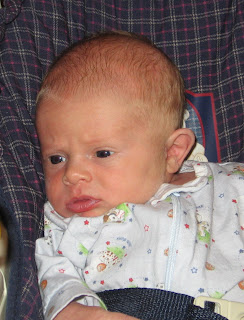 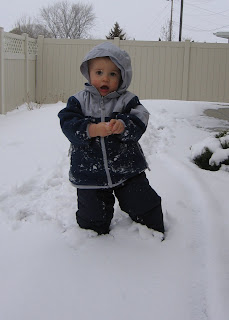 Evan playing in the snow!

Carter looks a little worried about the state of affairs. He has changed some, but just keeps getting cuter and cuter.

I think Evan would like to do anything outdoors.

He is a true cutie...I found 3 the hardest...once you're in a routine it's better for sure though! I'm so glad there is no snow here right now...we had our big fall in November so I'm snowed out!

They grow so fast. He alreay looks a little chubber then his hospital pictures. I'm already worried about being a mom to 3 and it's good to hear you say it isn't that bad. Good luck with the 18 years left : )

Carter is so cute! He looks like a mini-Evan.

Holy cow that's what I get for not updating myself on your blog. Congrats. that's so exciting. I'm glad everything is going so well. He looks adorable. I have also been surprised how easy 3 is(again knock on wood) but all is going well so far.

I'm not a huge snow fan but I too was really glad when it snowed. Kids make snow more fun.

Hey Emily I was wondering if you could give me an invite you your guys weight loss site. I would be interested in keeping up with everyone's progress as well and get tips. We have a group doing the same thing in Spokane as well. Lots of fun and great motivation
Thanks Cindy