After a month and a half of paperwork, phonecalls, and lots of waiting, Jordyn finally got her disability health coverage! So, we scheduled some doctor's appointments right away. Today she had an EEG (tests the electrical activity in your brain). I called to schedule an appointment with her new neurologist, and since it had been almost 2 years since her last EEG, they wanted to get an EEG done before her appointment next Tuesday afternoon. I debated taking Evan with us, but of course I'm too chicken to get a babysitter yet, so he came with. The appointment actually went really well. We had absolutely no waiting time and it was a fairly quick test. Evan was actually very well behaved too, thanks to the TV in the room. The worst part is when the nurse places 26 individual electrodes on Jordyn's head. They have to rub some cream on each of the 26 spots, with a Q-tip, and then press each electrode on, the cover them up so they can't pull them off. Jordyn obviously hated that! But after that part, she did great and was actually very happy! Towards the end of the test, they flash a strobe light (to try and induce a seizure - it's never worked with Jordyn). I think it bothered me more than it did Evan and Jordyn! It gives you a headache! So here are the photos I got today:

Jordyn all wrapped up and not liking it too much. 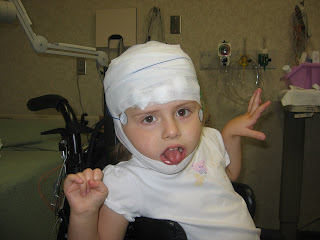 After the test. We had to leave the hospital with
her hair looking like this. We got a few strange
looks! 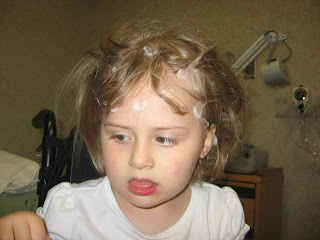 The next 2 photos are actually from 2 years
ago when Jordyn did a 24 hour EEG. I love
these photos because she is still so happy
even though she was doing something that
wasn't very much fun! Some of you may have
already seen these photos, but I thought I
would include them anyway because they are
so cute! 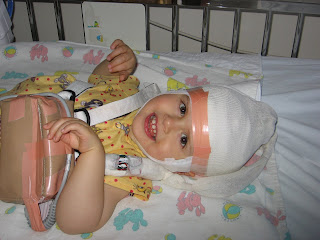 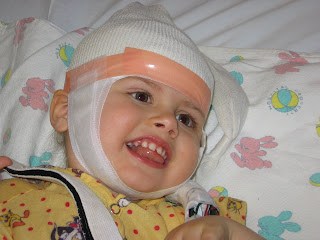 You can get the same strobe light effect by going to Chucky Cheese!

Jordyn is a doll even with "crazy hair."

Glad everything went well today--Jordyn is a real trooper. I have always loved those pictures too.

I told Chris I want to move to Boise just so I can babysit your kids for you. I have the same anxiety about calling babysitters! But we've already talked about that before.