This past Saturday we had the chance to go help with Chae's (Tom's brother) branding. Well, I'll have to admit that I really only took pictures and kept Carter from being trampled... I wasn't any help! After 8 years of being in the Bybee family, I finally got to see my first branding. So.... get ready for a ton of pictures:

Do these calves have any idea what is about to happen?? 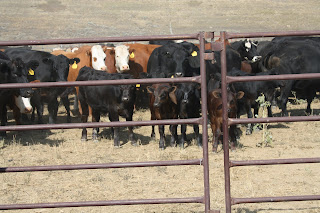 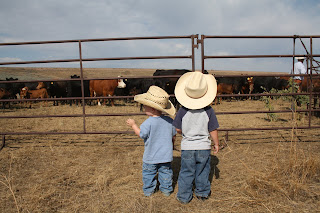 One of the great things about Chae's branding is that the missionaries come every year! Can you even imagine how fun/exciting/scary it must be for them? Look at them.... do they have any idea what is about to happen?? 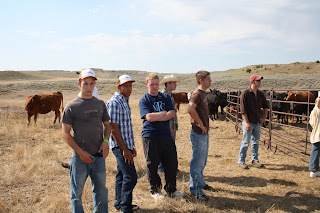 I have to say I thought they did an awesome job. Most of them just jumped right in and worked REALLY hard! Below: calf being branded. The smell of burning hair is HORRIBLE might I add! 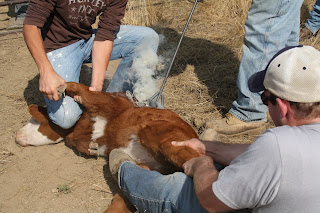 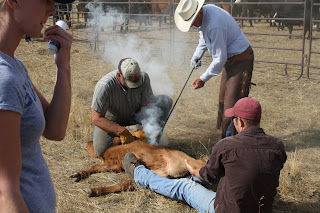 The calf has to be branded, vaccinated (Linda is doing that below), and then castrated. 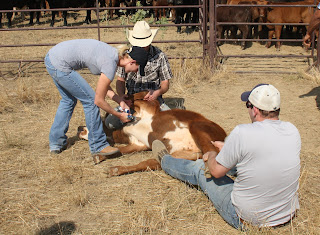 Here was a tiny calf that they let a little kid help with. The guy in the blue shirt is one of the missionaries. He was so funny.... he really wasn't interested in helping. Not sure if he was scared or grossed out...but he helped with this little one! Hey, he did better then me! 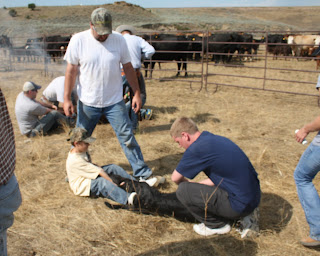 Way to go TOM! Wrestle him down! 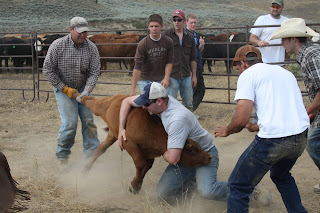 Aww Carter... he sat in this chair for a long time when we first got there.....he didn't even move! You just have to imagine all the action going on and LOTS of loud "mooing" and chaos. He was in shock. 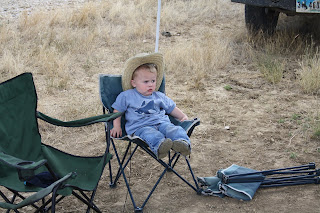 This will be a GREAT photo to send to the missionary wearing the white t-shirt. Won't his family get a kick out of it? haha Chae is the one helping him. 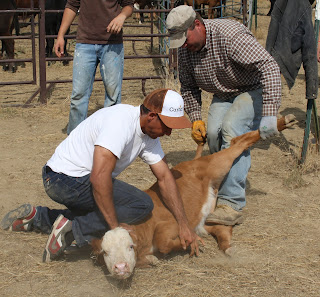 Gotta make sure they can't move, kick, or get away! That cow was looking at me like ,"HEEELP!" lol 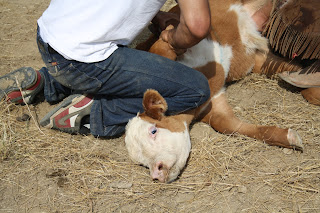 I think Travis (middle guy in the photo) should win an award...he did almost ALL of the castrating that day. Now that is a nasty job! 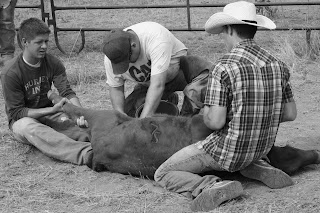 Tom's dad getting ready to rope. He looks mad, but he didn't know I was taking his picture! 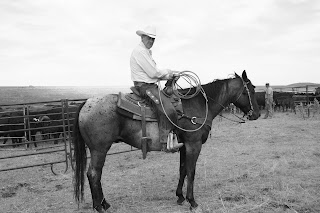 Dang this picture would have been awesome. Travis' hands were all bloody from castrating...but I didn't know my camera was set to black and white! 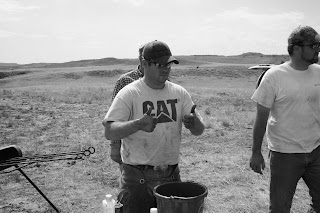 The brands in the fire. 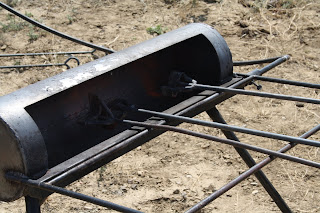 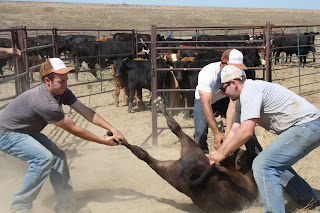 Look at Ninny getting in on the action! 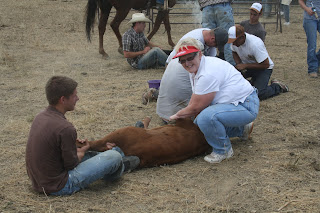 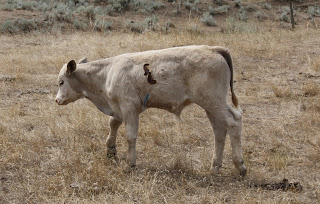 Wow, I can't even imagine how tired and sore these guys were! They worked pretty much non-stop from 9am-3:30pm.... it was 96 degrees out... and they branded 150 calves. We wondered if the missionaries were wondering what the heck they got themselves in to! Pretty fun day.... for me at least! :) 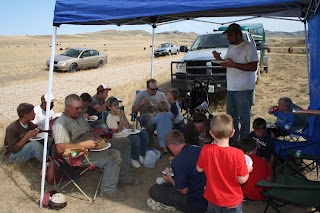 You got some good pictures -- captured the action! I really like the one of the boys in their cowboy hats. The pic of Tom's Dad is a classic.

WOW!! That looks like quite a workout. Great pictures.

Wow, what a great display of pictures, I'm glad that smell doesn't come through!!
I love the picture of your cute little guys...that's a keeper!!

ohy gosh..that horrible! lol..jason laughs at me all the time and makes fun of me cause, i cant stand going to rodeo's..i thin it's mean..lol..butim glad u had fun!

Things like this make me miss living in Wyoming. Even though I was not a cowgirl by any means, living in a place like Sheridan always makes you feel like you could be if you really wanted to. LOVE IT!!!

I'm jealous! Maybe I will have to ask Chae if I can come next year.

I can just see Momma K wrestling a steer down.

Wow! Now that looks like a "Rootin Tootin good 'ol Wild West Time"!!!!!
I actually love the black and white picture of the cowboy - it is cool!
Did it smell?
I don't know if I could have watched.
Your little guys look so dang cute in their cowboy hats!! Love it :D