So I thought you might want to know a little bit about our new town, Gillette. Or at least know where it's located? Check out the map below. If some of you forgot, I grew up in Billings, MT. Tom has family in Sheridan and Buffalo. (Buffalo is between Sheridan and Gillette) We are one hour from Devil's Tower and about 2 hours from Mt. Rushmore. So we have a little bit of site seeing near by.

This is about he prettiest picture I could find of Gillette! Even people who have lived there many years will admit it's not the prettiest location. I have to say that when we lived in Boise, I would complain a little bit about the lack of trees and beauty in the area (no offense to my Boise readers). BUT, now I have to say that Gillette REALLY doesn't have any trees! So I'm missing the trees and rivers we are used to. However, you only have to drive about an hour to see some of the most beautiful mountains. Gillette is called the "Razor City" because of the popular "Gillette Razors". Tom tried to convince me that the factory that makes Gillette razors was actually in Gillette. It's not....he's always trying to trick me! 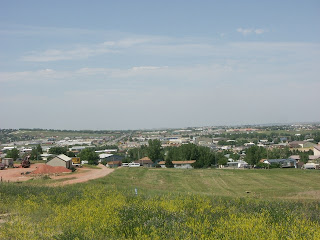 Gillette is a booming city because of the many coal mines in the area. (photos below) This area produces 89% of the coal in Wyoming and is also the leading producer of crude oil in Wyoming. The population is 27,000 and rapidly growing. My brother in law has a very successful business power washing and cleaning the huge coal mine equipment. We keep telling him they need to try and get "Dirty Jobs" to come and do their job! I haven't actually seen any of the mines yet, but at some point I might go take a tour. Oh, Gillette also is called the "Energy Capital of the Nation" too. I've been telling everyone how different Gillette is than what we are used to. First, it's the smallest town I've lived in so that takes a little getting used to. You can really tell it is a "mining town". Everyone drives trucks. I have probably counted 5-10 minivans in the whole city so far. I actually feel a little out of place driving a minivan! That's quite the change from Boise.... minivans were the norm! But, I have been surprised at how nice everyone is and how nice looking the town is. Most everything around town is kept up nice and a lot of buildings look newer. Shopping is def. limited, but we have a Walmart, Kmart, Albertson's, Applebee's, Papa Murphy's, Home Depot... and most of the normal fast food places. Word has it that we might get a Super Target! That would be a dream come true! As far as church goes, there are 3 wards and one student ward (there is a very small college).

So, I hope that helps you find out more about where we'll be living for who knows how long! We have been having a heck of a time finding a rental or any place to live. You wouldn't even believe all the options and directions we've looked at. We keep thinking something great must be coming our way because we sure have been looking hard, but nothing seems to work out. We weren't planning on buying, but we are almost being forced in that direction. Before we moved to Gillette we had heard that housing was hard to find, but I just figured,"Oh, we'll find something!" I guess they were right... it is hard! We had a few apartment buildings we were using as "back-up" plans. Those even fell through! So, we are seriously looking at buying now. We hate to do it so quickly, but we don't have much of a choice. So keep your fingers crossed we can find something fast and something nice! 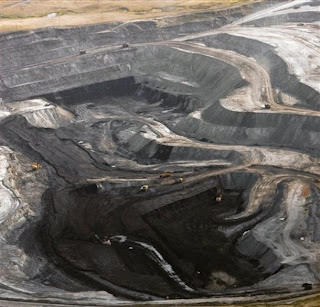 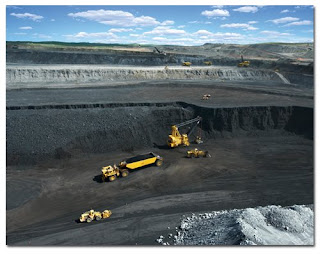 So is Tom working for his brother-in-law then? I think we must've missed something along the way, because I guess we don't really know where Tom is working now.

It actually looks like a nice place! There is something really great about living in a small town--somehow you feel safe and secure knowing you are tucked away from the big city. Also, I love Mount Rushmore! What a great little side trip to show the kids.

Good luck with the house hunt!

Hey girl! Yeah my cousins and uncle work on the trucks and in the oil mines. It is pretty insane working on those big rigs!! I went to visit them when i was in MT. My cousin was saying that apartments are hard to come by there becuase they are so behind. There are wait lists for years and most of the people that work in the mines and such are in long term hotels!!! So good luck finding a place and don't be too disappointed if you can't find a rental... there are just not enough out there!! I will let you know when i visit them next... one of my cousins wants to take me shooting. Although i just read an article on someone accidentally shooting themself so maybe i will pass on that... hahaha. peace!

I guess I did forget to update on Tom's job status! He got a job at a company called Air Gas. It is a gas,welding, and safety supply company. They have stores nation wide. He's already been working there for a month now and seems to really like it. He works in the store... you can check out their website to learn more:
www.airgas.com

Oh the beauty that is Gillette. Those pictures take me back! I hope that you are enjoying the small town.

Gillette sounds small but that it has the essentials - A JOB (ha ha), a Wal-mart and an Applebees! Also, bonus, not too far from your families.

I hope you find a place soon and have fun getting settled in your new town.

We're happy that Tom found a job and that things worked out for you.
Good luck finding a house and getting settled.
We miss your cute family in the ward.

Emily! Thank you for keeping everyone updated on your family! We miss you guys, but hope you are getting settled. Good luck on a house...that's tricky. I keep trying to look for you guys at church and you're never there! Thanks for keeping in touch.