Tom and I decided to make some holiday treats for the families that we Home Teach and Visit Teach for church. I have no idea how, but we came up with the idea to make "missionary gingerbread men" and then have a little quote about sharing the gospel with others at Christmas time or something like that. So here is our finished product. They are actually very tasty too. I baked the cookies and frosted them. Tom did the decorating detail. Piping decorations onto cookies is harder than it looks! Oh, we are also giving some of the cookies to the missionaries in our ward... we couldn't leave them out. These cookies are also in honor of my brother Todd, who is on his mission in NYC right now. We hope he is having a great Christmas season! 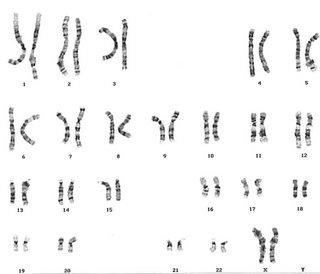 Here is a picture of Jordyn's actual chromosomes. I thought it was pretty interesting to see. We have received all the results of Jordyn's recent testing... including the final two tests for Rett Syndrome. All of the tests were normal!

I was not really surprised at all since that is the only results we have ever heard. The doctors keep telling us that she probably has a syndrome or genetic disease that they just don't know how to test for yet. I was thinking the other day that it would be pretty interesting if Jordyn was one of the first kids to ever have a "certain" disease or syndrome. And then I thought, they usually name the disease after the first person to have it, or the person who discovers it. So maybe Jordyn could have a sydrome/disease named after her. Tom and I were thinking of possible names and we came up with: Cute-itis, Cutest girl in the world Syndrome, or Cutie Pie Syndrome.

We also went to the neurologist on Friday for a check-up and to hopefully find a cause for Jordyn's recent irritability. It worked out well because Jordyn got very angry while we were there... so at least the doc. could see what we were talking about! I had to laugh because he said,"She is definately on the "high" end of irritibility!" I never thought I would be HAPPY that my child threw a fit at the doctor's office. Anyways, he wants to try an acid reflux medication first. And if that doesn't work then he said we could change her dose of medication or even try a new kind. We are anxious to see if any of these solutions will work.

We were at the mall the other day and we saw another young girl in a wheelchair. It's funny how excited we can get when we see other kids in wheelchairs... it really doesn't happen that often. I always want to run over and talk to them and ask them all sorts of questions. But, I usually never do! They are probably wanting to do the same to us. I actually like it when people stop and ask us questions. While we were at the mall, a lady stopped and talked to us for while... she said her neice or nephew had Cerebral Palsy. And the other day a lady stopped me in Walmart and said her 11 yr. old. daughter had the same wheelchair and asked me a few other questions. It's always good to hear that there are other people with disabled kids out there... even if you don't see them very often.

Last night we went to our ward Christmas dinner. It was a pretty good meal... ham, green beans, funeral potatoes, rolls, and pie for dessert. I made a tasty looking pie: graham cracker crust, a layer of cream cheese mixed with cool whip, and a layer of pumpkin on top. But, they had so many pies that they never got to serve mine! All that hard work for nothin'! Well, we ended taking one home with us (I made 2) so we could actually try it. It tasted great!
I was looking forward to getting the kids' picture with Santa, but Jordyn wasn't cooperating very well. We knew she would probably start screaming the second we put her on Santa's lap, so we decided not to stay for the whole party. It could have been a funny picture if Jordyn was sitting with Santa and crying, but when Jordyn gets mad...she doesn't just sit there, she kicks and bucks and will slide right off your lap! I also have a cold and wasn't feeling well either so went home.
This morning Tom had a "Youth Training Leadership Meeting" or whatever they call it. They have a breakfast and then the adult leaders train the youth on how to be good leaders, etc. It starts at 7:30 and he got home at noon! He had to give a talk at the meeting also. Then he came home, changed his clothes and went to work putting up Christmas lights. I have to say, Tom is such a hard worker and NEVER complains! For the past few weeks, he is at school all day during the week. Then on the weekends he works all of Friday and Saturday. Sunday is really his only day off and with church callings, he still stays pretty busy! I am probably not the most "supportive" wife either. Last Sunday in church our bishop was giving a talk and at the end of it he was thanking his wife for being so supportive. He said he is really busy all of the time and his wife never complains. She just lets him do whatever he has to do without whining or complaining. It was kind of a lightbulb moment for me because I ALWAYS complain when Tom has to leave! And I am such a whiner too. So, starting now, I am going to try really hard to not complain when Tom has to leave or be gone all the time. So thanks Tom, for working so hard for me and the kids! (I know, I'm so corny!)