Warning: Very long and full of lots of medical mumbo-jumbo.


Well, we made it back from our weekend trip to Seattle. We left Thursday afternoon and stayed the night at a hotel in downtown Bellevue. Friday morning we drove 15 min. to the Children's Hospital (we have to say that we DID NOT like Seattle traffic! Way too many cars!) for Jordyn's opthalmology appointment. We really liked this doctor. He was very interested in Jordyn and seemed extremely smart. Every other doctor we've talked to that knows him also gives him great praise. Anyways, he said Jordyn's eye problems are neurological. (That is what we thought, too.) He actually was not too concerned with her eyes crossing. He said they could be fixed with glasses. However, he said Jordyn would absolutely HATE having glasses on (she hates things touching her face!) and it would be easier to just deal with her eyes crossing, since they only cross every once in a while. He was more concerned about her lack of attention to objects and lack of tracking objects. Her eyes are actually very physically strong/good... except she is a little nearsighted, but not enough to need glasses for it. He was extremely surprised that Jordyn's MRI's have shown nothing. He thought for sure, the cause of her problems would show up on a MRI. He explained her vision issues as cortical visual impairment (the eye itself is normal and she sees things, but the brain does not process the information correctly). So basically, there isn't much we can do about her eyes, but just deal with it! She will continue to see her opthalmologist here in Spokane and we will see if he agrees with what the Seattle opthalmologist said! Oh... the opthalmologist also asked us if she had been tested for Rett Syndrome! We just laughed and said yes and it came back negative. Almost EVERY doctor or therapist we talk to thinks she has Rett Syndrome!

After being in opthalmology for almost 3 hours, we went straight to the neurology appointment. She basically told us that we have already tested and done almost everything they would have us do. She did recommended a few more tests though. She said there are three diff. tests for Rett Syndrome and we only did one of them. (Why our Spokane neurologist only did ONE of the tests... we do not know!) So, we will do the other two tests. It is a blood test and will take around two months for the results. The first Rett test we already did, tests for 80% of Rett Syndrome cases, so the chances of getting a positive result from these other two tests is low. But maybe Jordyn falls into that other 20%! The third test we will do is for a syndrome called Smith-Lemli-Opitz syndrome. People who have this syndrome are unable to make enough cholesterol to support normal growth and development. Jordyn has a few of the symptoms, but does not have many of the main symptoms... like poor growth! The neuro. didn't really act like Jordyn had a great chance of having this syndrome, but wanted to test just in case.
The neurologist also told us that our chances of finding a diagnosis for Jordyn are very slim. We kind of already knew that and other doctors have told us the same thing. But she also said that scientists are always coming up with new tests and new syndromes. In 10 years, the medical world will have advanced so much and between now and then, they may come up with something new to test Jordyn for.
So we were pretty happy with the appointments! Now on to something different!

Saturday morning we went to the Seattle Aquarium. The kids really seemed to like it and so did Tom and I! They had some great exhibits. We saw sea otters, harbor seals, sharks, octopus, jelly fish, eels, starfish, and ALL kinds of wierd fish and sea life.
Saturday afternoon we went to the Pike's Place Market. Tom's job is to post about that adventure and post pictures.
So check out his blog http://2bedapartment.blogspot.com/

We were so proud of our kids for behaving so well on the trip! We had to buy Jordyn ice cream because she was so good. They slept well at night and traveled well in the car! And Jordyn did awesome at the doctor's appointment! We were so happy! 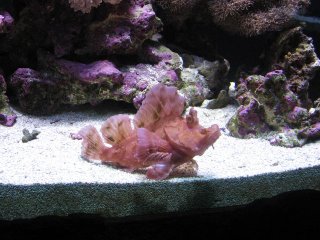 (above) One of the many wierd fish we saw. (below) Star fish and tide pool life. You could put your hand in the water and touch/feel everything. Very cool. 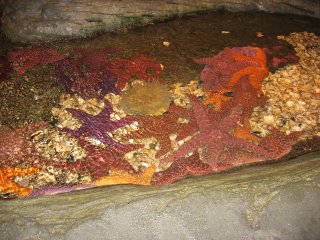 I've been waiting patiently to find out how your trip went! It sounds like it was so much fun! And your car didn't break down, yeah! Love the photos.

We're so glad you had such a good time and everything went so well at the doctor appointments.

It reminded me of when we went to Seattle for Joel's double jaw surgery.
I was trying to remember which of our kids went along. That was a long time ago.