Today we ventured outside to try our first geocaching in the Boise area. I found some caches near the Boise river, also by a small town called Eagle (very cute town, about 5 miles north of Meridian). We set out to find a series of 8 caches in a one mile stretch of trail. We only ended up finding one! We spent nearly an hour hiking around and then realized that all of the 8 caches were on the OTHER side of the river. So we drove to the other side of the river (there was no bridge to walk across) and found the trailhead. By then, the kids had fallen asleep. So, Tom went and found the cache for us. Then we went home and found a cache that was about 200 feet from our front door! Who would have known there was a cache so close to us. It makes you wonder how often you walk or drive by a cache and have no idea!
Tom told me that I won't ever be a really good geocacher because I won't stick my hand in holes or crevices that are under rocks or in the ground! I don't want to know what is living in there. And yes, people actually put caches in those creepy holes.
I told Tom that I thought geocaching was the only way to get husbands (at least mine) to go on walks. 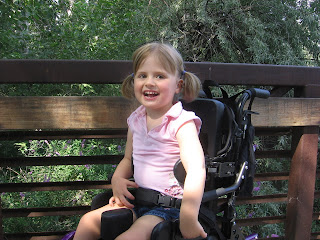 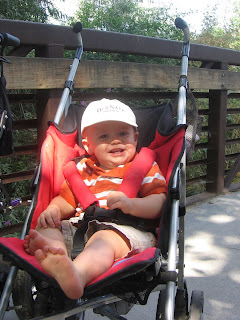 Tom coming back to tell us that the cache is on the other side of the river. We always take the kids as far as we can on the unpaved trails, but sometimes Tom will go ahead and find the cache and bring it back. Some of the terrain is too bumpy for Jordyn's wheelchair. 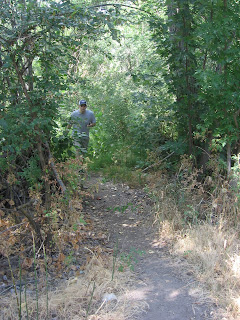 Our first up close look at the Boise river. I was so glad to finally see some water and green trees! It is actually very pretty and green near the river. But, we are starting to wonder if it will ever rain here! 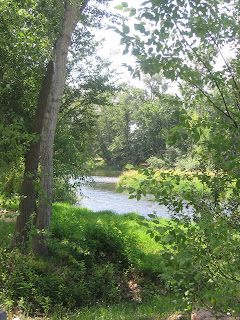 From the smiles on Jordyn and Evan's faces, I think they were just happy to be on an outing after being indoors so much because of the hot weather.

Those are two happy Geokids.