Time For a Little Change

It seems like I have gotten hooked on making changes lately. Not huge changes... just small ones.

I didn't have much to do today so I thought I would sit down and blog about what we've been up to lately.

Evan is turning into a little rascal! It's actually pretty funny. I absolutely love when Evan discovers something new... even something naughty. Because of Jordyn being developmentally delayed, Tom and I have a totally different perspective when Evan learns something new. I'm sure you can imagine how greatful we are that he is able to do even the smallest things. The milestones just seem to be even more incredible than normal. (And at the same time, it leaves a little ache in your heart because you are always wondering,"I wonder what Jordyn would look like doing that?" Or "I wonder what she would sound like.") I am also always in shock that he can figure certain things out! How do kids learn these things? And of course I want to brag to everyone, but I'm sure they don't think it's as exciting as I do! Anyway, I caught a few photos of Evan "learning" some new things: 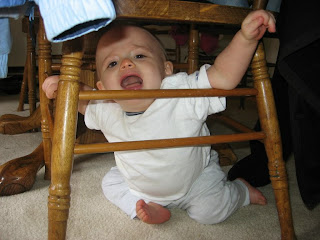 Evan getting stuck under the kitchen chair. It took him
a little practice to finally figure out how to get out! 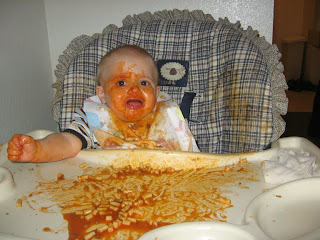 This was a bigger mess than Evan's 1st Birthday cake.
Can't wait for when he starts throwing food! 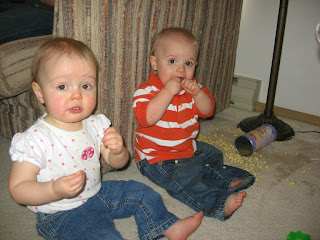 I was watching the kids one day (ok, and watching TV
at the same time) and it got really quiet. The kids were
hiding by the side of the couch and somehow got the lid off
the snacks and were shoveling them in their mouths as
fast as they could! 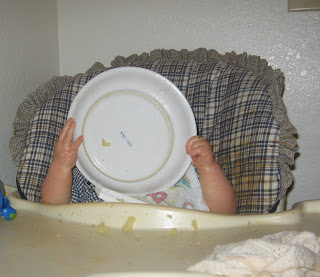 Hope everyone had a great Easter Sunday! We had a great morning at church and then went over to the Kovich's house for lunch. We had some great food (ham, twice baked potatoes, rolls, fruit salad, green bean casserole, "bunny" cake, and nest egg cookies) and we were very stuffed the rest of the day. Susan put together a little Easter egg hunt for the kids. Evan and Katherine just sat in one spot.... so there wasn't much "hunting" going on there! Elizabeth found most of the eggs and helped Jordyn find eggs too. Here are some photos of the egg hunt: 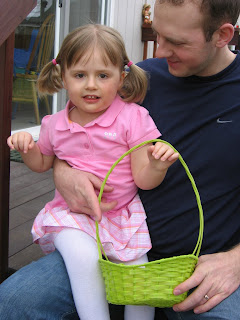 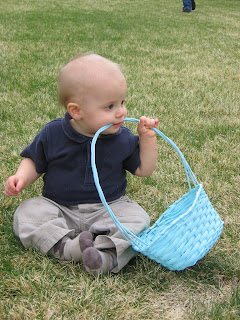 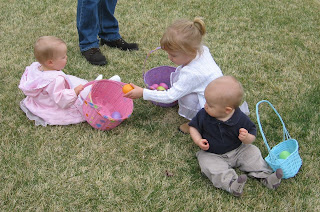 Note: the ambulance ride had nothing to do with the race!

This past Saturday was the Birch Bay International Road Race that my friend Jeni and I raced in. (It is located in the very northwest tip of Washington... just miles from the Canadian border.... hence the "international" race name.) We headed up on Friday afternoon and ate dinner and visited with her in-laws that live near Seattle. Then we drove about another hour and stayed the night in Bellingham. Luckily it wasn't raining on Saturday morning. We had some awesome scenery for our run. It was 9 miles of running right along the shoreline of the bay and then also through part of Birch Bay State Park. As you can see in the photo below, Jeni and I tied for the silver medal..... ok I lied, everyone got medals! We had a great time and even got some super cool running socks... ha! After the race we headed back towards Seattle and did a little shopping. Jeni's mother-in-law, who works as a hairstylist, was nice enough to take some time and cut and highlight my hair. After we did that, we took off and went home! It was nice to get away and just relax and have fun. I'm sure some people think running a race is definitely not relaxing!

Our lives got pretty crazy earlier in the week. On Tuesday, Jordyn had a pretty big seizure at school. Surprisingly, this is the first one she has had while at school. They called us first, but thought it was severe enough that they should also call 911. They described the seizure to me, but since I really wasn't 100% sure what the seizure was like, we did not mind them calling 911. Better safe than sorry. When we got to the school, there was a fire truck and paramedics already there. The ambulance arrived at the same time as us. Needless to say, it was quite the scene! We got to her class and we could tell right away that she had indeed had a bad seizure. But, the really bad part was over and she was already asleep (which always happens right after her big seizures... and then she sleeps the rest of the day). The paramedics thought she should go to the ER and get checked out. So I rode with Jordyn in the ambulance and we went to the hospital. It was Jordyn's first time riding in an ambulance and mine too! They checked Jordyn at the ER and asked us a million questions. They thought Jordyn had one of her big seizures because of the medication changes we have recently been making. We talked to her neuro. and he just recommended increasing one of her meds. and meeting with him soon. And since her post-seizure behavior was pretty typical and familiar to us... they sent us home (4 hrs. later!) . So, it really wasn't anything too out of the ordinary... just the fact that she was at school when it happened made it a pretty wild day!
During the ambulance ride, they gave me a teddy bear to give to Jordyn when she woke up. I started thinking about all of the stuffed animals Jordyn has accumulated over the past 4 years during doctor visits, special appointments, and procedures. I got them all out and took a picture of her and the stuffed animals together. You would think she would have even MORE stuffed animals considering all of the stuff she has gone through, but we would go broke! I guess we will do anything to try and make her feel better!
You'll notice in Jordyn's stuffed animal photo that her face rash is back with a vengeance. We finally got the OK from the pediatrician to take her to a dermatologist! They couldn't get her in for 3 weeks so that's a bummer. But, I am very anxious to see if they can find a solution!

And just a side note... I think we all need to harass Tom about his recent LACK of blogging. He has gone an entire MONTH without writing anything. Now he will have to blog six times in April to make up for his "New Year's Resolution" of blogging three times per month. So come on Tom.... we all want to hear from you! 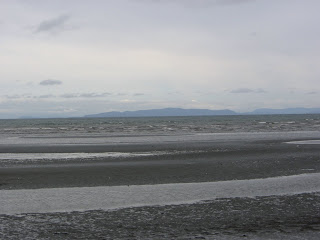 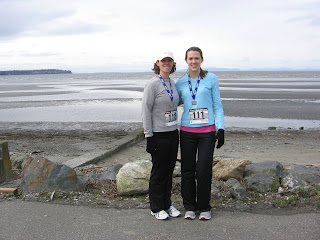 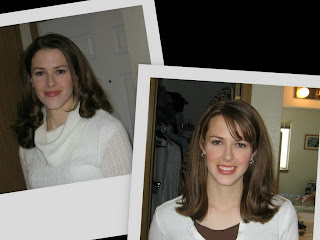 "The Hair Cut"... Before and After 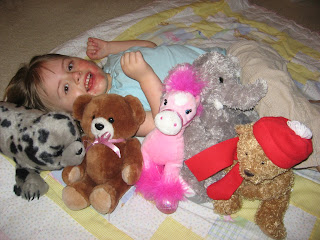 Jordyn and her stuff animals.
From L to R:
Baby Seal from our trip to Seattle to see a new Neurologist and Opthamologist.
Teddy Bear from her recent ambulance ride.
Pink Pony from the Kovich's when Jordyn had her 24 hour EEG.
Elephant I bought Jordyn when she had had her skin biopsy.
Teddy Bear from an appt. with the Shriner's Hospital.